rAHHH : « There are hundreds of baile funk songs coming out every month and they all seem to capture a moment of wild energy » – Heeboo

rAHHH : « There are hundreds of baile funk songs coming out every month and they all seem to capture a moment of wild energy »

rAHHH, as a « an exclamation you find yourself saying when you’re surprised or excited ». rAHHH like a London pure product. Between afrobeat, grime, UK Funky and Gqom or.and baile funk influences, the rAHHH world, with its raw poetry, is worth learning to dance and dream on it.

rAHHH will be playing for the very first time in France, in Paris, for the Dancing Shoes party, at International club, on saturday 30th. What will you do for the very last day on june ? For now, let’s know him !

Why RAHHH, where does the name come from and what does it mean to you?

It’s a slang word, an exclamation you find yourself saying when you’re surprised or excited, maybe reacting to a song or a situation. With rahhh it felt like there was a heavy London influence to the music and rah is one of those words that feels very London, it always pops up like an involuntary action so it just felt right at the time.

When did you start making music and why?

I started making music in 2010/ 2011. My sister’s friends introduced me to dubstep, I remember hearing the Skream song ‘Stagger’ and up until then I hadn’t really paid much attention to electronic music. I started to dig into it and looked into how it was made and then had a go myself. I had been in a few bands at school up until that point but that was my first experience of writing music. Since then there have been a few aliases, and a few breaks but I always come back to making music, it has become a habit that I can’t stop.

What’s your first remix and why this one? How to you choose tracks that you will remix?

The first remix I made as rahhh was of Alkaline’s song ‘Living It Up’. Sometimes, something about a vocal grabs your attention and makes you want to take it in another direction, with the Alkaline remix the vocal felt almost boxed in by the instrumental so I wanted to try and create a song that could give the vocal more room to dance, more harmonies to hit.

You’re as good with afrobeat than with rap music or urban wave, what are your influences?

My Influences are always shifting, there’s always something new to inspire, at the moment I’m paying a lot of attention to baille funk with its raw minimal vibe and super simple structures. There are hundreds of songs coming out every month and they all seem to capture a moment of wild energy, they record it without any affectation and then it goes straight onto youtube / spotify without much mastering or obsessing over details. I think it’s a good reminder to keep things simple. Gqom is also something that inspired me recently, hearing songs by artists like RudeBoyz and DJ Lag in a dark, small room there’s this sort of unrelenting, constantly rising Durban pressure that builds up from the most simple of rhythms.

If you had to describe your music with three words, what would it be?

You come from London right ? What is there in London that you like about the music industry?

Yeah born, raised and a bit stuck here. With London there’s so much to inspire you, I mentioned Gqom earlier and to me it’s amazing that you can go to a small club in Tottenham and find promoters willing to throw a party dedicated to a relatively obscure South African genre, just because they love it. And that’s a common trend, it’s easy to find people that are really just about the music here, not putting on appearances or anything just a bunch of people that enjoy making music, art, clothes or whatever and bringing their influences and ideas from all over the world.

How do you feel before your premiere in France ? What does the parisian scene means to you?

I am super excited, I guess with the songs I play and the edits being generally London-centric, I feel like a bit like an ambassador for the city in a weird way, so I’m excited to represent. With Paris I have always had so much love for labels like Sound Pellegrino, the Club Cheval crew, ClekClekBoom and some of the Ed Banger stuff growing up. Paris always seemed to have its own bright, loud kind of futuristic club music that seemed so far removed from London.

I guess nights give you a chance to see people with their guard down, putting aside their inhibitions and becoming more susceptible to new ideas, new music and new people. There’s something special about being in a dark room full of strangers, facing a speaker and dancing till the sun comes up. 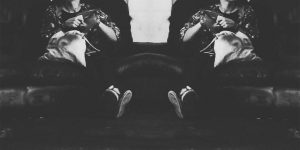